The full collection is available for viewing at the Town Office.

We still have plenty of the Broadway High School available. We are looking into the ability to order previous buildings, and to develop a new one!

Construction of the new Broadway High School was completed in 1997. The high school on Springbrook Road officially opened in 1998 and welcomed their first students. Since then, Broadway High School has graduated approximately 4,000 students. The school colors are green and white and the nickname and mascot of the school is the “Gobbler.” The school mission statement is “Working together within a positive atmosphere to provide a foundation for lifelong learning.:

Broadway High School opened its doors to 580 students on September 15th, 1952 replacing  the 1908 school located on Main Street. At that time the school included grades 8-12 and the school board’s decision to move the seventh grade to the high school necessitated the addition of eight classrooms, known as the annex, which opened in 1959. In 1963, John C Myers intermediate school opened and BHS became, again, a four year comprehensive school. In 1988 additional classrooms and a gymnasium were added to the school. In 1998, BHS moved into a new building located on Springbrook Road and the 1952 version was assumed by J. Frank Hillyard middle school.

-Special thanks to the Broadway High School staff for history.

Built in 1907 after a fire destroyed the building that had been the first high school in rural Rockingham County, the brick school building that stood at what today is the corner of Main and Lee Streets anchored a school complex that served Broadway area students for most of a century. The building, with sex rooms, a library, office and auditorium, was built on the site where C.E. Barglebaugh had started a school in the 1870s. It housed all grades until the high school was built on its southern side in 1920. With several additions over the years, these buildings housed all of the Broadway area’s students until a new high school was built west of town in 1952. At that point, the old high school became an elementary school and remained on until 1972. It again housed students in 1976, during construction at what was then John C. Myers Intermediate School.

The Broadway Volunteer Fire Department (BVFD) was organized in 1936 with twelve members, a single fire engine and a hand pulled tank and cart. This fire equipment was housed in a building owned by the Broadway Motor Company on Main Street, Broadway. In 1946, the present home of the BVFD was constructed on North Central Avenue. Membership had grown to twenty-five and volunteers of the organization were supported by the Ladies Auxiliary formed in 1945. The fleet of the BVFD grew as well, a 1945 Chevrolet Holms Pumper was added in 1946 and a 1934 Ford Hose Truck was added in 1947. The Broadway Emergency Squad was founded and organized by the Broadway Volunteer Fire Department. Over the course of time, the BVFD has continually updated its fleet to better serve the needs of the community. While the BVFD may be using a substantially upgraded fleet today, the dedication to the community that was present in 1936 still remains firmly implanted in the active volunteer members that have comprised the Fire Department each year since.

Special thanks to Jack Lohr for historical information.

The railroad was completed in 1868 from Mt. Jackson through Timberville and Broadway to Harrisonburg. The 1885 edition of Hammond’s Atlas of Rockingham County showed the depot in place and lists Samuel C. Williams as the depot agent for the Valley branch of the B&O Railroad. In approximately 1914 the depot and railroad became a brand of the Southern Railway System and George Williams became the depot agent. He retired in 1939 and Larkin “Bob” Will became the depot ages in 1939. Bob Will remained depot agent until passenger train services were discontinued in 1946. The old depot was dismantled in 1947.

Special thanks to Harold Wood for historical information, June 2005.

In 1903 a group of Broadway citizens organized the 1st National Bank of Broadway. The bank opened for business in 1903 at 145 Main St. Also located in the original building were two apartments and the Town’s telephone switchboard office. G.S. Aldhizer was the first bank director. He served the community from 1903-1909. The bank continued in this building until 1953, when under Bank Director D.C. Asker a new building was constructed on the corner of Main and Miller Streets. The car parked in front of the Bank is a 1953 Convertible Muntz Coupe.

Special Thanks to Harold Wood for Historical Information.

Fawley’s Garage was started in 1920 by Mr. Dorman W. Fawley. Soon after Fawley made arrangements to acquire the Chevrolet car and truck agency. He continued to be Broadway’s destination for Chevy cars and trucks for the rest of his professional life. The building was remodeled in the 1940s to its present appearance. The front show room was added during the renovation and the citizens of Broadway could stare wistfully into the show room as they made their way downtown. Mr. Fawley and his sales team provided sales and service to the community for nearly sixty years. The Chevrolet dealership closed in the early 1980s. The building’s automotive heritage continued in 1986 when it was bought by W.W. Cars & Parts, Inc., a full service restoration shop offering everything needed for a high quality restoration, as well as consignment and direct sales, appraisals, and maintenance. W. W. Motor Cars offers indoor storage for all restoration projects; modern paint systems; in-house upholstery; a unique Mustang division; and an excellent research library.

Special Thanks to Harold Wood for Historical Information.

Rhodes Service Station was started by Miller D. Rhodes of Broadway in 1924 on land purchased from Frank and Sally Hoover. The business was operated by the Rhodes family for 78 years. In 1927 Miller’s son, Joe R. Rhodes, became owner. Added to the service station merchandise were appliances: Crosley, then Firestone, and later Westinghouse and Fridgidaire. In 1955 a larger building replaced the original and included merchandise from the family’s next-doors Firestone store. The name was changed to Rhodes Service Center and Appliances. Mary Stuart Rhodes Bell and her husband, Richard Bell, ran the store from 1968-2002, when the white building at 212 North Main Street was sold. Most recently the building has been occupied by No Limit Performance and Auto Care in 2015.

Originally serving as a wagon supply store and a GMC dealership, the building situated at 202 North Main Street was remodeled as a movie theater in 1939. The Roth brothers showed movies in the theater seven nights a week with matinees showing on Saturday and Sunday for 15 cents each. S.E. (Peanut) Brown served as the first local manager of the theater followed by Henry W. Stickler, who remained manager until the theater closed in the early 1950s. In its rich history this building has served also as a roller-skating rink, a furniture store, VTO Saddlery, and event venue and coffee shop, and most recently, Achieve Studios fitness center. The building is currently unoccupied. 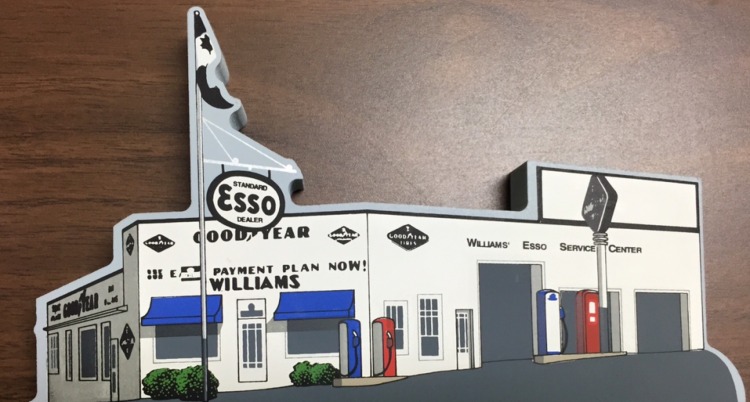 Located at the corner of Broadway Avenue and Main Street, Williams Garage, later known as the Crystal Service Station, opened prior to 1920 as a full service garage. In 1935, the building was remodeled into a service station with electric gas pumps replacing the hand pumps. The addition of a pinball machine and five-cent cokes made it a regular stop over for BHS students on their way to and from school. In 1972, owner “Bun” Williams passed away and the station was sold to Sonny Rhodes and became known as the Crystal Station. The business continued to attract high school students playing pool and other games, and became a popular hangout. In 1985 the Station closed and sat idle for several years before being razed. The property was purchased in 2000 and now serves as a Broadway Dentistry. 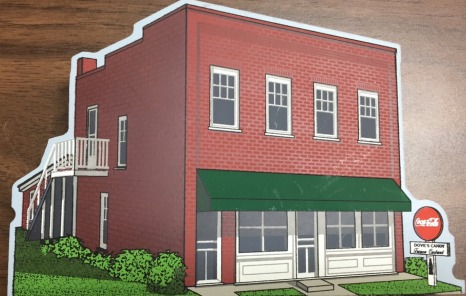 In 1924, bricklayer Claude Bodkin started erecting a building for Cora Mason, who opened “Broadway Bakery” in 1926. The bakery was later run by Walter and Margaret Ritchie and employee June Litton. Reuben Dove bought the building in the 1940’s, removed the large ovens, brought in a candy conveyor operation and cooling room, and open Dove’s Candy Store. The apartment upstairs was rented to the Cullers, and Mrs. Cullers individually wrapped the candy bars which Mr. Dove sold to stores in the surrounding area. Later Mr. Dove started selling hot dogs and hamburgers. He installed a frozen custard machine much to the delight of town folks and other customers who came to Broadway for the shopping. The property was sold in 1975 to Wayne and Sandy Biller (Sandy was June Litton’s sister) as their residence. The building remains in good hands.

Special thanks to Richard Cullers for historical information.

in the 1890’s the Broadway Drug Store was built by G.S. Aldhizer, and run by pharmacist Henry Aldhizer, RPh. After Dr. Aldhizer pass away, G.S. sold the store to H.D.H. Showalter in 1929. The pharmacy was then operated by Mr. Kavanaugh, RPh until 1932 when Carl G. Showalter graduated from Pharmacy School and took over Broadway Drug. In 1986 Carl sold the store to his son, Nelson L. Showalter, who continues running it today. in 2001 the store moved from Main Street to it’s current location on Springbrook Road in the Broadway Medical Center.

In 1897 the original country store building was built by J.E. Beard and T.J. Pennybaker. 16 year-old A.W. Whitmore began working for Mr. Beard as a clerk  in 1908, and became a partner with Mr. Beard along with S.E. Long in 1910. In 1912 Mr Long sold his interest to A.W.’s brothers, E.A. and W.E. Whitmore. in 1916 the Whitmores sold their interest to Mr. Beard and A.W.. A.W. acquired sole ownership when Mr. Beard died in 1927. In 1945 he was joined in ownership by J.S Whitmore, and a year later boy M.R. and G.R. Whitmore, and they changed the name to A.W. Whitmore and Sons. In 1956 they added a Ready-to-Wear building. In 1962 a grocery moved in to the new building on Miller Street, and Randy and J.S. Whitmore Jr. join. in 1965 Gordon Whitmore joined. In 1979 the grocery department was enlarged, and in 1997 ACE Hardware was added. The grocery and ACE Hardware are no longer a part of the building, but the Country Store remains as A.W. Whitmore and Sons, currently run by Jay and Brenda Whitmore.